It had to be said.

Travis Scott is a poser.
I haven't called someone a poser since maybe middle school, so writing this feels weird, but sometimes you have to call a spade a spade. And a guy saying people who have never skated shouldn't wear Supreme, but then puts out some of the comical skateboard stuff he has in the past few months, has to be put on blast.

Let me start off this article by saying, I'm not here to bash Nike SB or any of the skate guys. Their job is to make money off shoes, and the Nike Sb Travis Scott Dunk shoe is definitely doing this. It's putting a bunch of cash into great skateboard stores pockets. But sometimes you have to call a spade a spade, and Travis Scott is just the most recent celebrity caught in an embarrassing move trying to be a skateboarding culture vulture. I have no problem with people wearing skate gear who are fans of skateboarding, you want to wear a Thrasher shirt? Dope! But it's the people who constantly pretending to be a part of different cultures, that is so embarrassing to me. The thing with lots of trends, is you can easily do this. You want to look like a cool motorbike guy? Go buy a motorbike and ride it around, it's fairly easy and people won't notice that you're just jumping on that trend cause it's hot right now.

But skateboarding is different, people dedicate their entire lives to this culture, and it's painfully obvious when you're trying to fake it. I have no problem with celebs wearing skate brands and saying they appreciate skateboarding, or they admire it, that's rad. But it's the people like Travis Scott, claiming they skate and that they're a part of it, when it's painfully obvious when you see this dude just try to push on a board, that he's never done it before in his life. He even just dropped a line of terribly embarrassing skate hardgoods on his website. 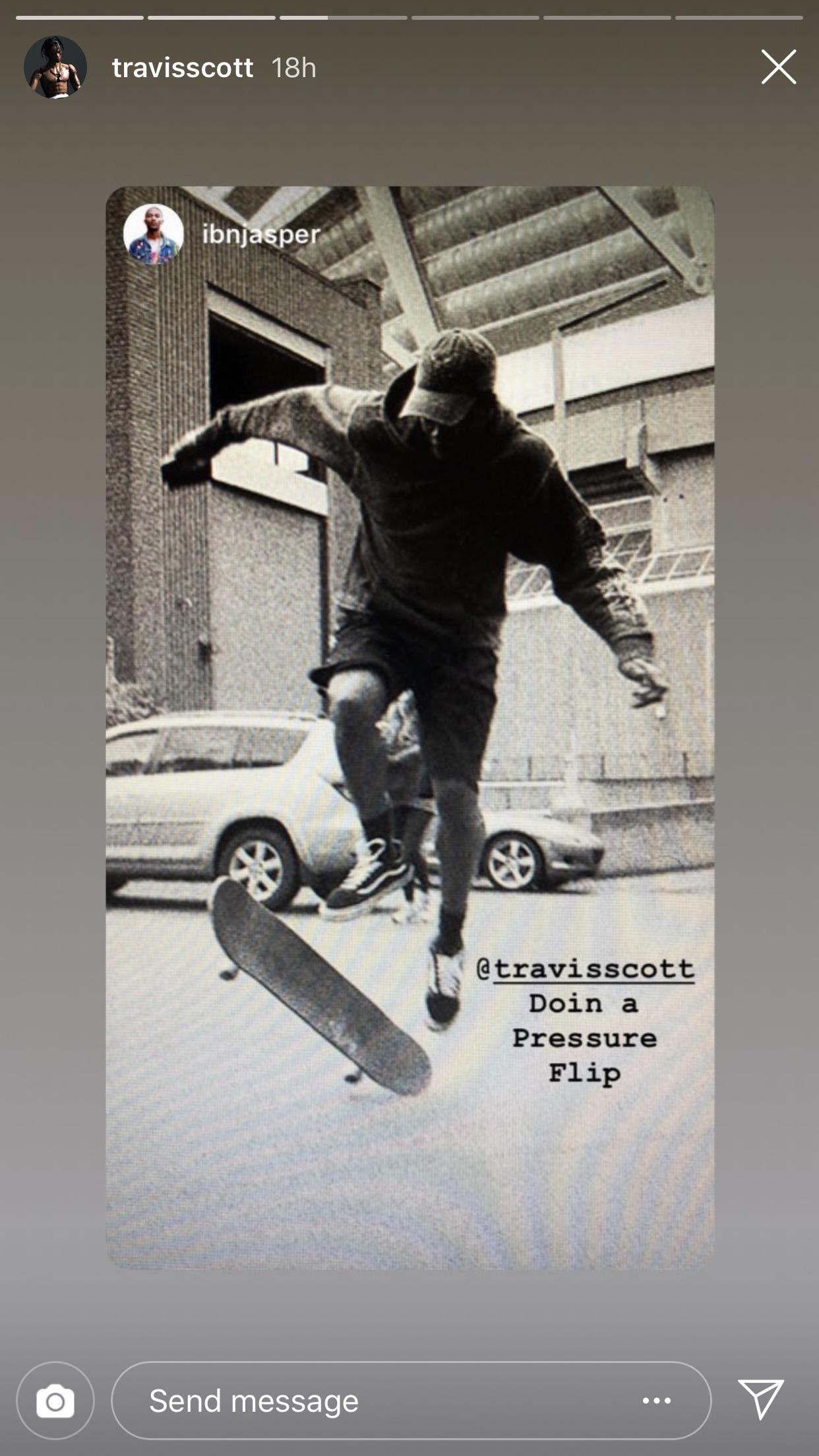 If you skate, you know damn well this is just a picture of a guy who doesn't skate desperately trying to flop a board around. One of his buddies must have looked at the pic and said "hey, looks kinda like a pressure flip".

To coincide with his Nike SB shoes, Travis Scott also decided to drop a line of truly terrible looking skateboard hardgoods, all made at the cheapest factories possible I'm sure.

"I used to fuck with Supreme, of course, because I was a skater. But there are too many people who buy all this skate gear and it's just a fashion thing. Nobody's actually a skater, they just rock the gear. That happens in Houston too; everybody wanna rock the same gear as everyone else without living the life that comes with it. Doesn't matter to me but it's funny. Anyways, I used to skate and then I broke my hip, so not so much anymore." - Travis Scott

Above is a quote from spin.com of Travis Scott trying to justify why he can wear Supreme but others shouldn't, when it's painfully obvious that he is just one of the very clowns he's talking about. Again, it's fine if you want to wear Supreme or Thrasher or any of that stuff, but don't pretend you skate when you obviously don't.

When the Nike SB x Captain Jack Travis Scott Dunks released, they also dropped a little skate edit with it. Travis Scott has been getting some heat online from lots of skaters for some of the embarrassing clips in it. Note there isn't even a clip of Travis Scott riding a skateboard in this, because if you watched Travis Scott take one push on a skateboard, it would instantly become apparent that he's never rode a skateboard in his life. I watch dad's who come in and haven't skated in 20 years, pick up a board and awkwardly skate it for the first time in decades, but as soon as they're on the board, they know where their weight goes and how to push, even if their balance isn't quite what it used to be. You can tell watching Travis Scott with a board that he's never skated before. 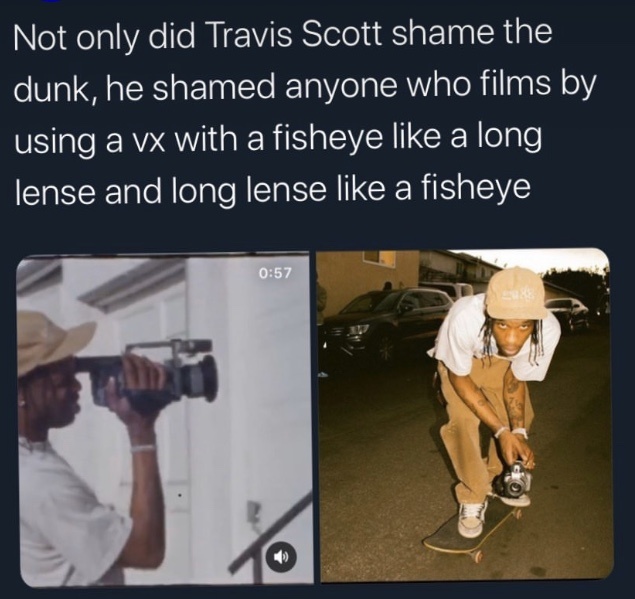 In his new Nike SB clip, it's also apparent that he's never filmed before. He's holding a Sony VX with a century optics fish eye lens on it, a lens used for filming extremely close up, and he's looking through the viewfinder from about 10 feet away from any skateboarding. Later in the clip he's holding the same camera pretending to ride along while filming (a time you actually would use a century optics death lens), this time with no lens, so he'd be focused on sometime around 10 feet away from any skater riding next to him. Twitter is already having lots of fun with these things, so enjoy.


My whole point here, is just to have some fun and put Travis Scott on blast for being a culture vulture. It's fine to wear skate brands, but don't tell everyone you skate and talk big game when it's painfully obvious you have no clue what you're doing or talking about.