Supreme just leaked that they are opening a San Francisco location at the end of the year.

Last year when Supreme founder James Jebbia confirmed he had sold 50% of the company for half a billion dollars to the Carlyle Group it did two things; first it valued the company at over a billion dollars and second it solidified that we would be seeing many more Supreme stores in the near future. First off, most people were talking about how this valuation is way too high considering they do 100 million in sales annually. To put this into context the entire Vans brand is valued at approx 3 Billion (Link Forbes) and do over 2 billion in sales annually.Which meant that for Supreme to live up to this valuation they will have to open more locations to bring their revenues up, even if their brand is super valuable.

This week we saw the first trickle of the Supreme retail flow starting with a sneak announcement that Supreme will be opening a San Francisco location in late 2018 or early 2019. Although Supreme hasn't announced anything officially, this image was leaked of an instagram post showing someone holding Supreme's invitation to their community meeting letter. The letter shoes the location is set to be 1011 Market Street, which is a major traffic area in San Francisco and is also the area where Thrasher Magazine is going to be opening a brick and mortar storefront location as well. 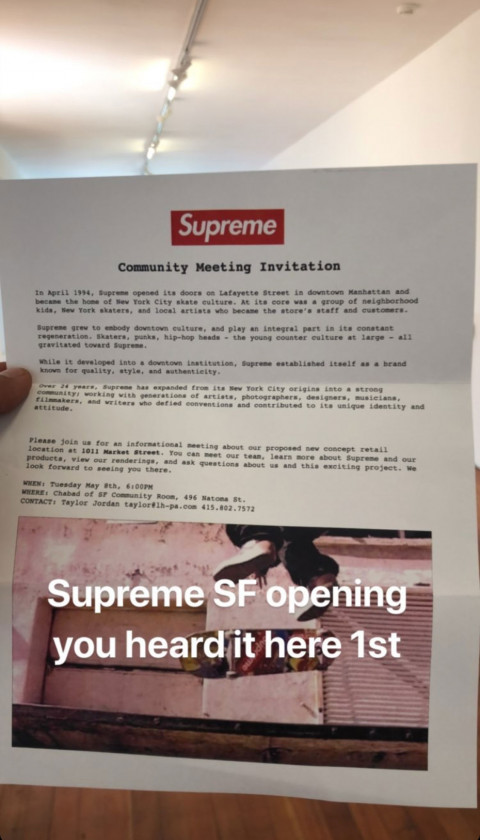 If Supreme is going to live up to their billion dollar valuation they are inevitably going to have to open a lot more stores across the world. I have a feeling that in the next couple years we will be seeing Supreme stores in all the large trendy cities in North America. I wouldn't be surprised to see another L.A. location as well as a Supreme in Chicago and Toronto in the next two years. I also think there will be a few more locations added in Asia and possibly a Berlin location coming soon.