Shorty's Hardware ruled the game in the 90's and early 2000's, Here are some interesting facts on the start, Rosa, Muska, & much more!

Shorty's Skateboards: 14 Things You Didn't Know About Shorty's
Shorty's Hardware ruled the game in the 90's and early 2000's, Here are some interesting facts on the start, Rosa, Muska, & much more!

1)TONY BUYALOS:
Tony is a sponsored skateboarder from Santa Barbara, Califonia. After being sponsored he wanted to remain in the skateboard industry and started a board brand called Eppic, this later became Small Room skateboards.

In the early 90's Tony and his girlfriend at the time, April Hamrick decided to start Shorty's Hardware our of their bedroom. The idea was to create better skateboard hardware, bolts that were smaller, lighter, and stronger. So they started Shorty's hardware with $200 out of their pockets. The hardware was a great intro to the skateboard industry because there was little to no competition in that segment, and it let them put together a really stacked team.

2) CHAD MUSKA:
Chad has a pretty turbulent upbringing, going to 12 different schools by the time he was in 6th grade. He was into skateboarding, BMX and graffiti. He lived in a few different cities before moving to San Diego to try and make a shot at skateboarding and ending up homeless. In San Diego he ends up meeting lifelong friend Jamie Thomas, who at the time was sponsored by and running Toy Machine skateboards. Jamie ads him the Toy Machine team and they start filming for lots of legendary videos. 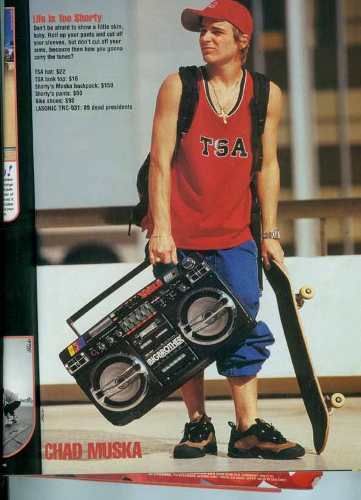 After an accident stopped the Welcome To Hell video premiere from happening, Chad has a drunk run in with Ed Templeton (Toy Machine owner) and finds himself kicked off the brand the morning. Chad's full part was pulled form the video, leaving him without any sponsors.

3) SHORTY'S SKATEBOARDS:
Although the hardware was popular, the brand didn't explore until they added one man, and started making boards, that man was Chad Muska. After a pretty messy break up with Toy Machine skateboards and getting kicked off the team for making a drunken scene at the Toy Machine Welcome To Hell video premiere. Muska got offers from quite a few brands, most notably Flip Skateboards offering him to be the first American rider on their brand alongside Geoff Rowley, Tom Penny, Arto Saari & Rune Glifberg.

Around that time, he got a call from Tony Buyalos, offering to fly him up to Santa Barbara for a meeting with Shorty's. When Chad went up for the meeting, Tony pitched him the idea of starting Shorty's Skateboards and forming a new brand bigger than just hardware. Chad was intrigued by the idea of starting something new, and like the fact that Tony was willing to give him a lot of creative control, team input, and a really lucrative paycheck. After many offers, he signed the deal with Shorty's, and the skateboard brand was formed.


4) THE TEAM:
When they approached Muska he got the task of forming a team for the board brand. The first person he adds to the team is Steve Olson, a friend of his who was riding for Foundation at the same time Muska was on Toy Machine. Muska says Olson was his favorite skater at the time. He also adds Brandon Turner and Peter Smolik, adding Aaron Snyder not long after. Tony wants to add a couple younger kids from Santa Barbara, Muska gives the seal of approval and they add Sammy Baptista and Jesse Silva as the only amateurs at the time. 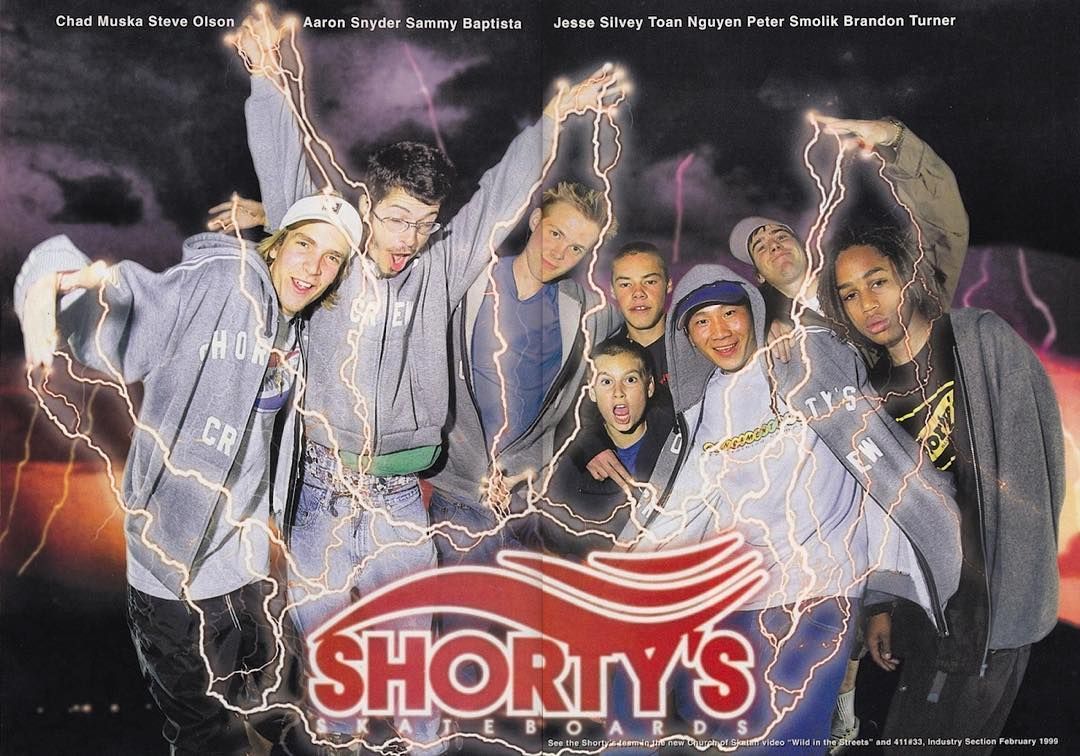 5) ROSA:
Born and raised in Santa Barbara, Rosa was skateboarding's only true pin up girl. Tony decided he wanted to make some cheesy pin-up girl style Shorty's ads that were poking fun at the car industry pin-up girls. He called a few skateshops asking if they knew anyone that would good. Rosa's name got put forward by a shop in the area, but she originally said she didn't want to do it. After meeting Tony and April, she really liked them and decided she'd do it. 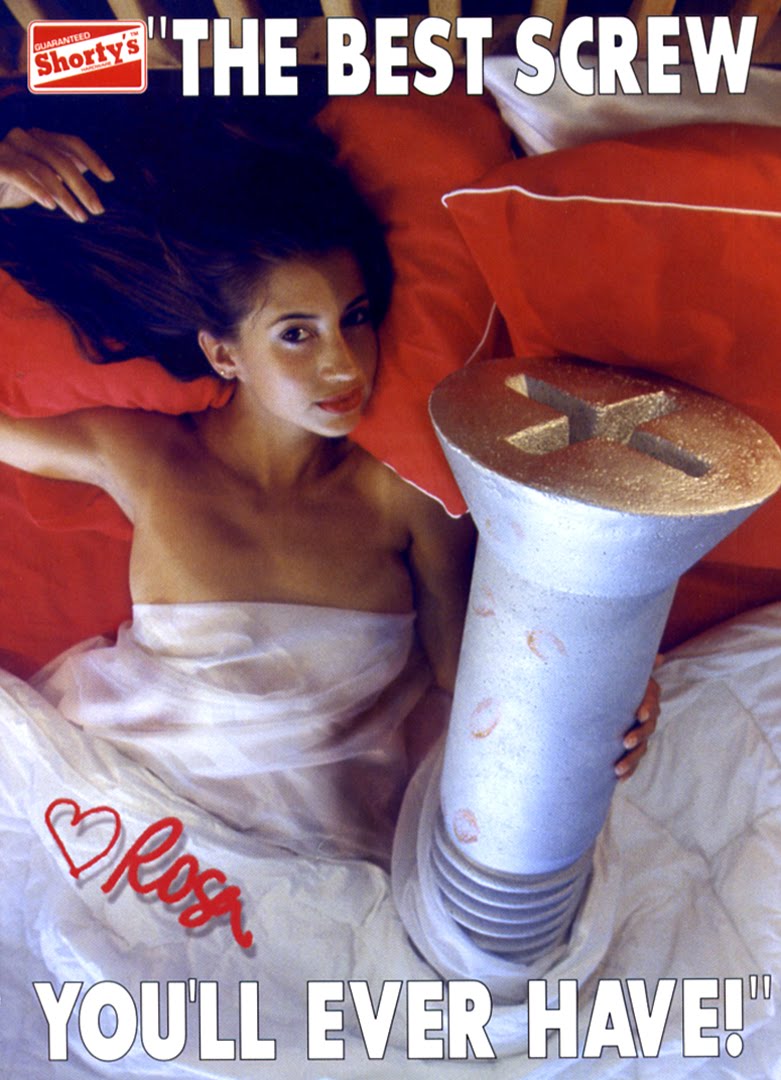 The first Rosa ad was in the 2nd edition of Big Brother magazine. (backward cap and tank top), she was 18 in the first photo, and got paid $100 for the ad. In an interview with Skateboarder magazine, she said that her favorite ad was the "guaranteed for life' ad and her least favorite was the 'utopia' ad. What started as a spoof really took off and started to become a brand of its own. Later down the line, Rosa said she was getting paid $300 for a 1-page ad, $600 for 2-page ads, and $1000 for posters. She also made royalties off any videos ($1 per copy) she was in, plus $1 off any t-shirts or clothing she was on, saying one year she made over $20,000 from royalties alone. She also got offers to models from lots of other competing companies at the time, including industry heavyweight, World Industries.

FUN FACT:
In the ad of Rosa laying on the beach, it's actually Tony Buyalos who's skating in the background of the ad. Also, despite many rumors, Rosa and Muska never dated. Rosa said in her skateboarder interview that the only pro skater she ever dated was Kris Markovich. 8) FULFILL THE DREAM:
Surprisingly; Tony’s GF April Hamrick edited the entire video after never having edited or using a editing program, Muska and Tony helped her with the vision for the video. 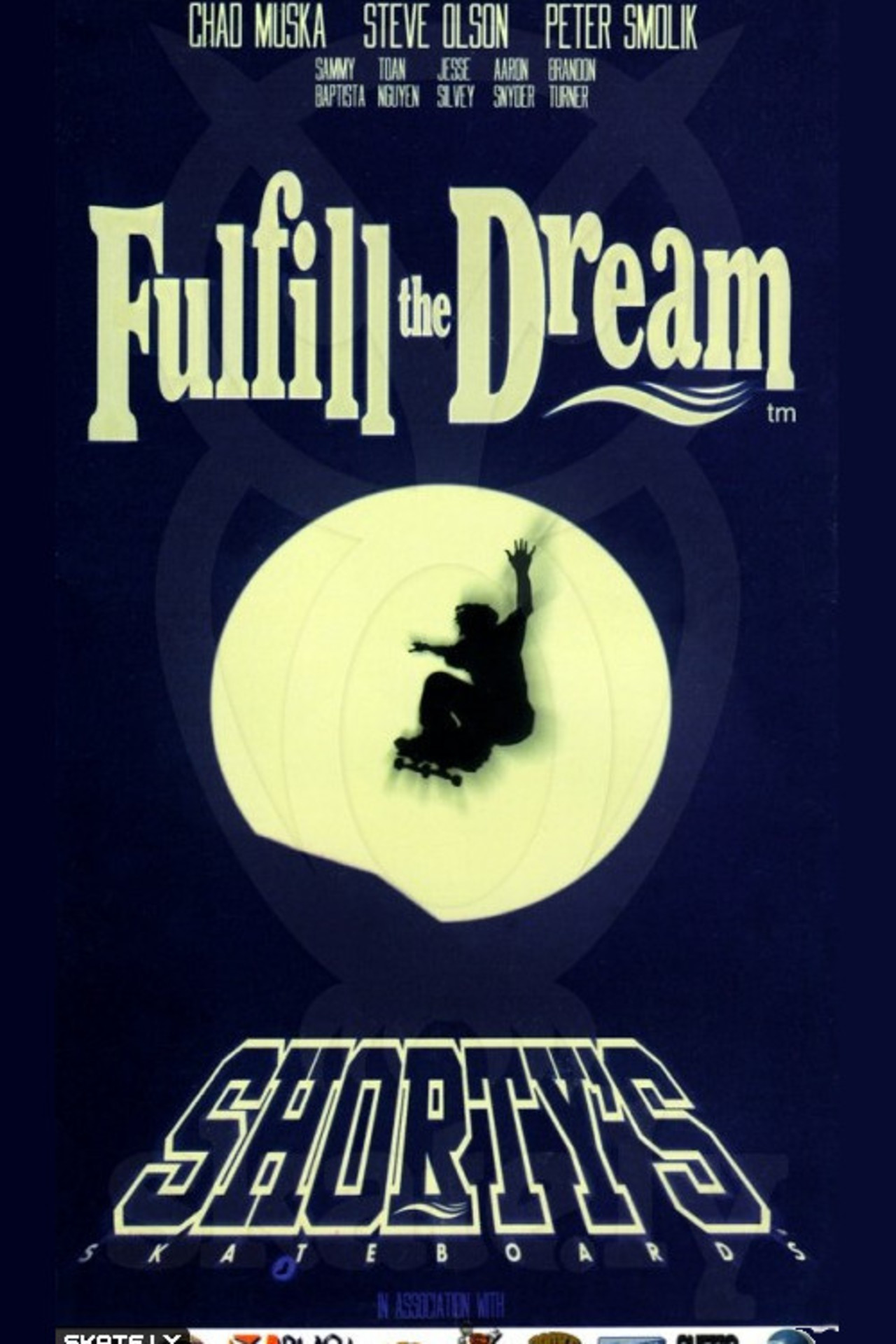 A lot of MUSKA’s trick is FTD were actually first try. Muskas first trick is a 50-50 that was supposed to be his ender in his unreleased welcome to hell part, and a lot of this part was actually his Toy Machine part remixed with new footage splashed in. It is interesting to note that Muska skated to his own music in Guilty; Muska Beatz.

10) MATT COSTA:
Matt Costa rode for Shorty's, you might know him from touring with Jack Johnson, Modest Mouse, Oasis, and Death Cab. Before his music career took off, Matt was an up and coming AM skateboarder that had footage in a bunch of different videos.

11) HOW TO GO PRO:
In 2005; Shorty's puts out their video "How To Go Pro", it features parts from Brandon Turner, Torey Pudwill, Chad Muska, and many more. After a falling out, Muska decides to leave Shorty's due to him feeling that he did not have creative control or enough input with the team.

12) APRIL VS SHORTY'S:
In May of 2004; April Hamrick actually sued Shorty's for breach of contract

13) SHORTY'S ACCESSORIES:
After Shorty's massive success in skateboard decks and hardware, they began to expand their accessories; some include Black Magic Grip tape, Doh Doh Bushings, Ghetto Child Wheels, Black Panther Bearings, and even a backpack that had speakers built into it. The Backpacks worked by hooking up an MP3 player and music would play through speakers on the side of it. 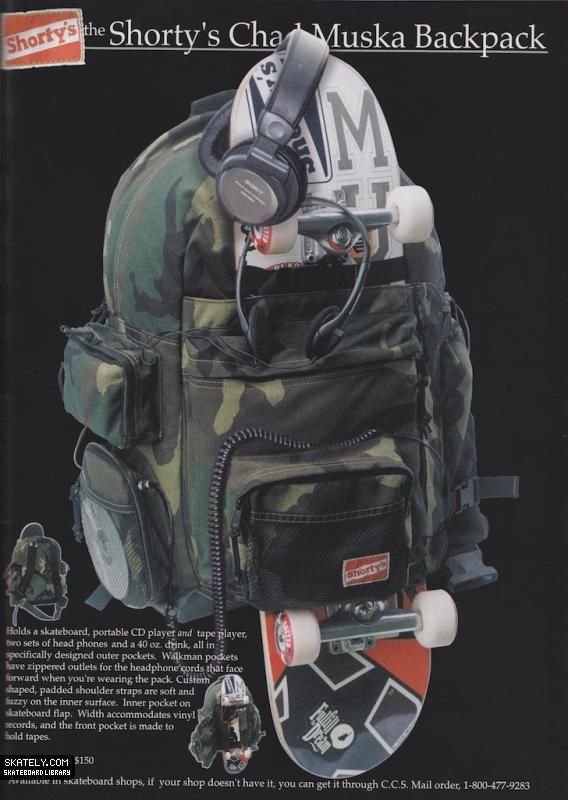 14) THE END OF SHORTY'S:
In April 2011 Shorty’s announces they will no longer be making skateboard decks, however they still planned to move forward with apparel and accessories; many people saw this as the death of the brand. However; to this day Shorty's continues to make hardware and accessories, and eventually they began to make boards again.