Everything you need to know about Olympic skateboarding from qualifiers, uniforms, equipment rules, and many other interesting facts... see more.

HOW OLYMPIC SKATEBOARDING WORKS:
With the Olympics right around the corner, skateboarding will be on the world stage as a 'sport' for the first time in history. It's definitely a pretty polarizing topic amongst skateboarders, but like it or not, skateboarding is an Olympic sport now. This leads to lots of people asking how Olympic skateboarding works. Here are all the details as of now of when, where, who, and why! We also discuss what the future of skateboarding looks like after the Olympics.

What are your thoughts? Should skateboarding be in the Olympics?

Who Runs Olympics Skateboarding?
The entire Olympic Games are run by the International Olympic Committee (IOC). They are in charge of the games and oversee everything from what sports take part, to what corporations sponsor the games.

Underneath the IOC, every sport has a governing body for that sport in the Olympics that basically runs that sport and determines rules and regulations for the sport. In skateboarding, that organization is called World Skate and they report directly to the IOC and have control of skateboarding's Olympic presence. The interesting thing about World Skate is that it used to be called "Fédération Internationale de Patinage a Roulettes (FIPR)" which translates to “International Roller Blading Federation”. So yes, the irony is that Olympic skateboarding is controled by a group of rollerbladers. The World Skate organization umbrella covers rollerblading, aggressive inline, artistic rollerblading (figure skating on blades), and scootering. See more on World Skate here: http://www.worldskate.org Dave Carnie wrote a funny article on World Skate and you have read it here: From Bad To Worse For World Skate.


What events are there?
There are only two skateboarding events at the Olympics: Street & Park.
Street: The street section will be plaza style parks featuring mostly ledges, stairs, and rails.

It will use a Street league scoring system where each skater gets a run section consisting of 2 x45 second runs and a best trick section (each skater gets five tries on an obstacle to do their best trick possible). After these sections, the top 4 scores give the skaters final score and the skater with the highest score wins.

Park: The park section features bowls designed to mimic the origins of skateboarding in backyard pools, but on steroids. Each skater in the park section will have 2 x40 second runs and a best trick contest.

There will be a men's & women's catagory for both park & street.

How Do Skaters Qualify for the Olympics?
To go to the Olympics, you need to gain points from the Olympic World Skateboarding Rankings (OWSR). There are different kinds of events that have different values.

Each different level of events gives you different amounts of points (IE world championships are going to give you more points than a 5-Star Event.)

ALSO: Individual countries have their own contests within countries to be able to go to Olympic sanctioned events. IE: Someone winning some Canada Skateboard Contests, can qualify to go Skate Dew Tour or Street League Events (and be ranked by the Olympic World Skateboard Rankings).

How Do Olympic Skateboarding Points Work?
A skater's top 2 points from 2019 and top 4 points from 2020 will be added to give their total points scored. (So if you fell and did terribly at one contest it doesn’t matter, because it's the best point of the year). In the event of a tie between two skaters they look at their next best scores for a tie breaker.

You can see the World Skateboard Rankings Here: (Note you can filter the rankings by country, gender, etc) so you can see “Who’s the highest-ranked Canadian Street Skater”
http://www.worldskate.org/skateboarding/rankings.html

What Skateboarders Are Competing In The 2021 Olympics?
The IOC just released the official list of skaters competing in each category. They can be seen below. 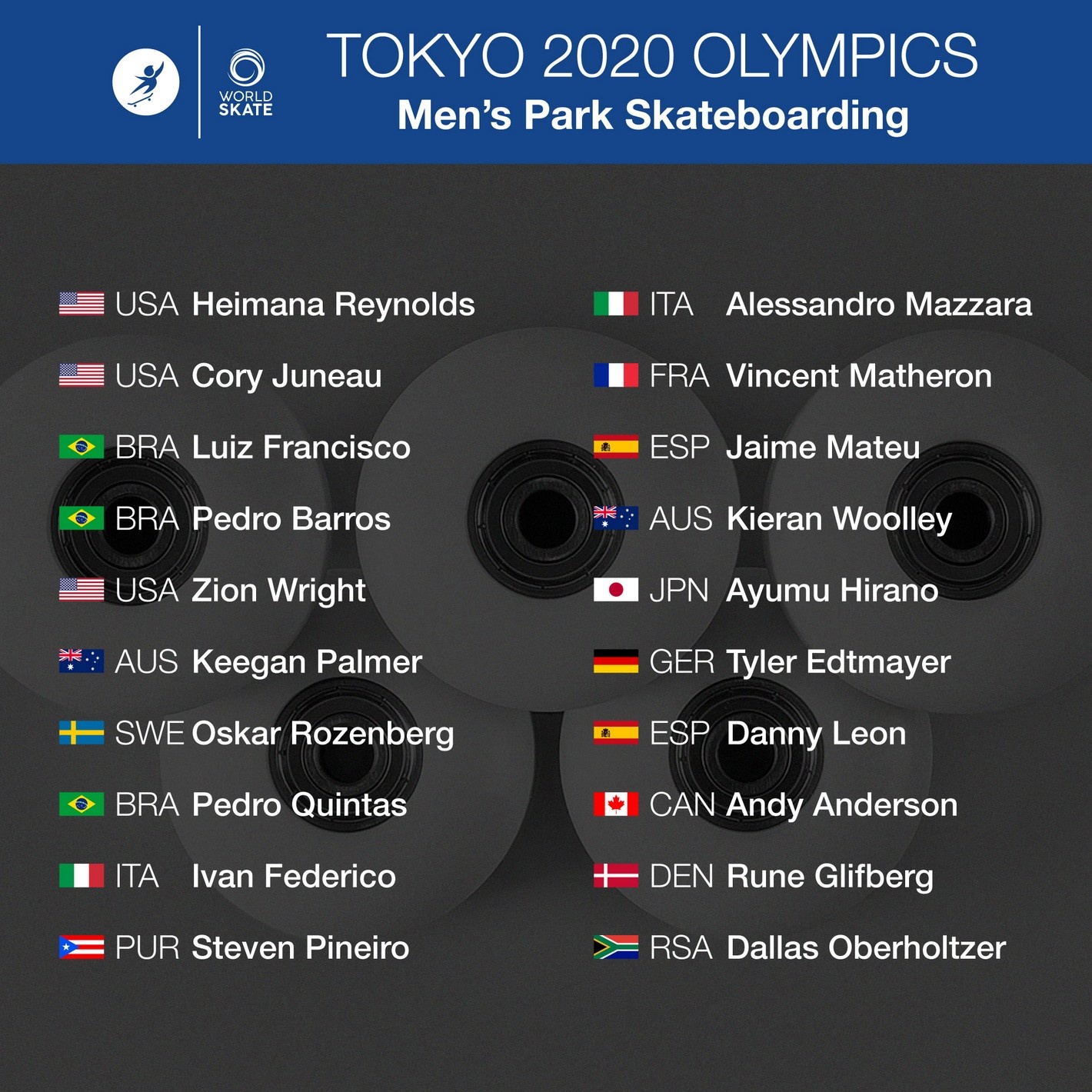 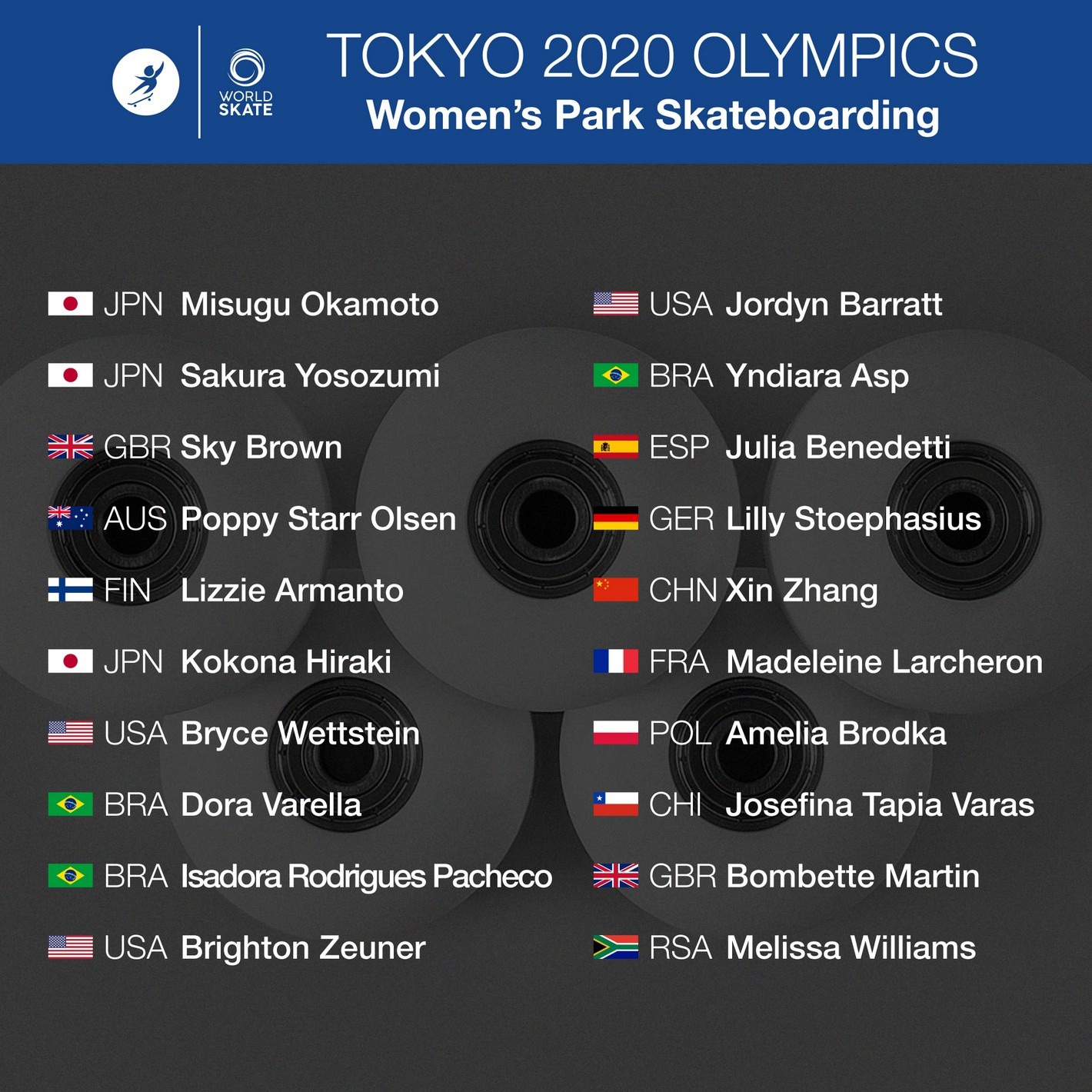 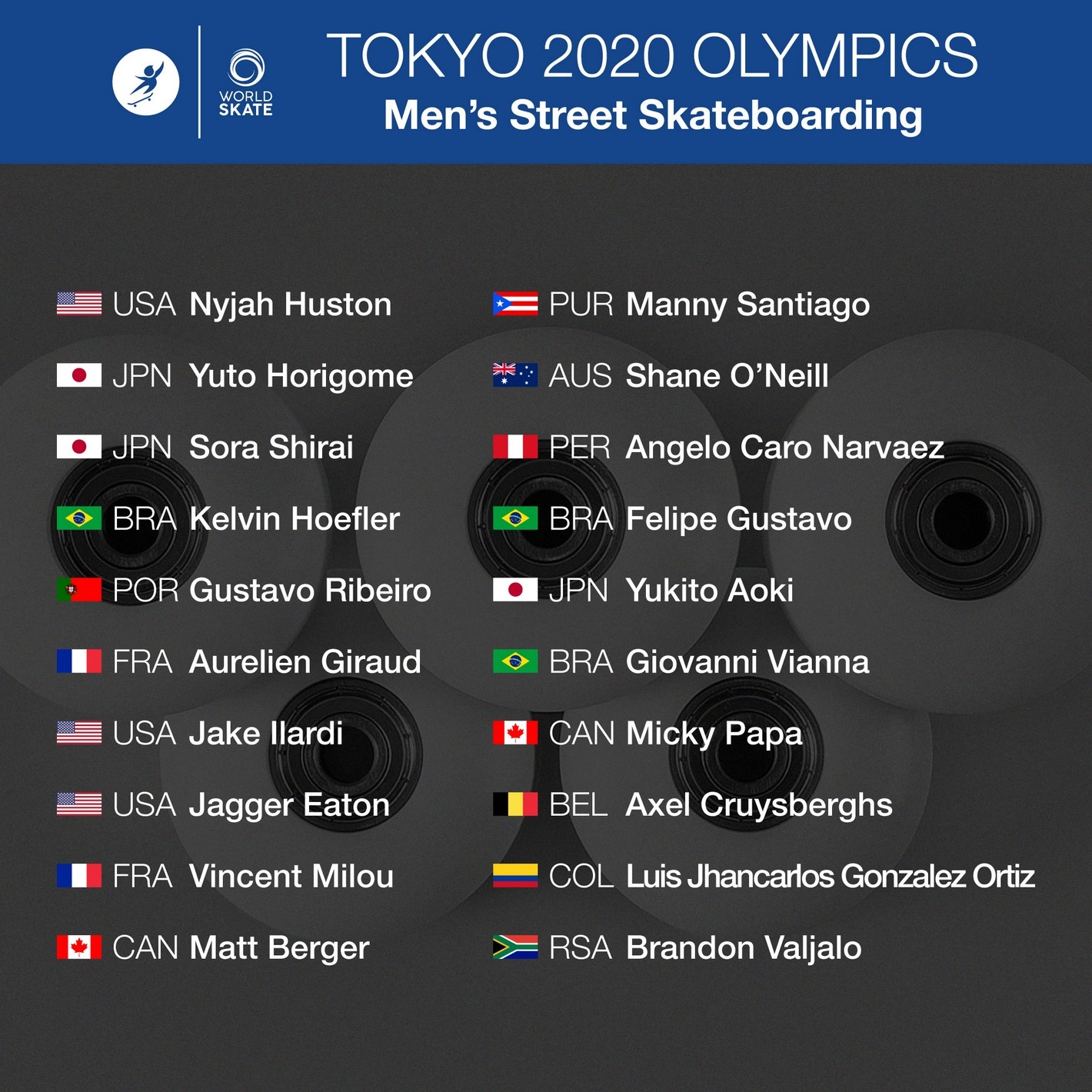 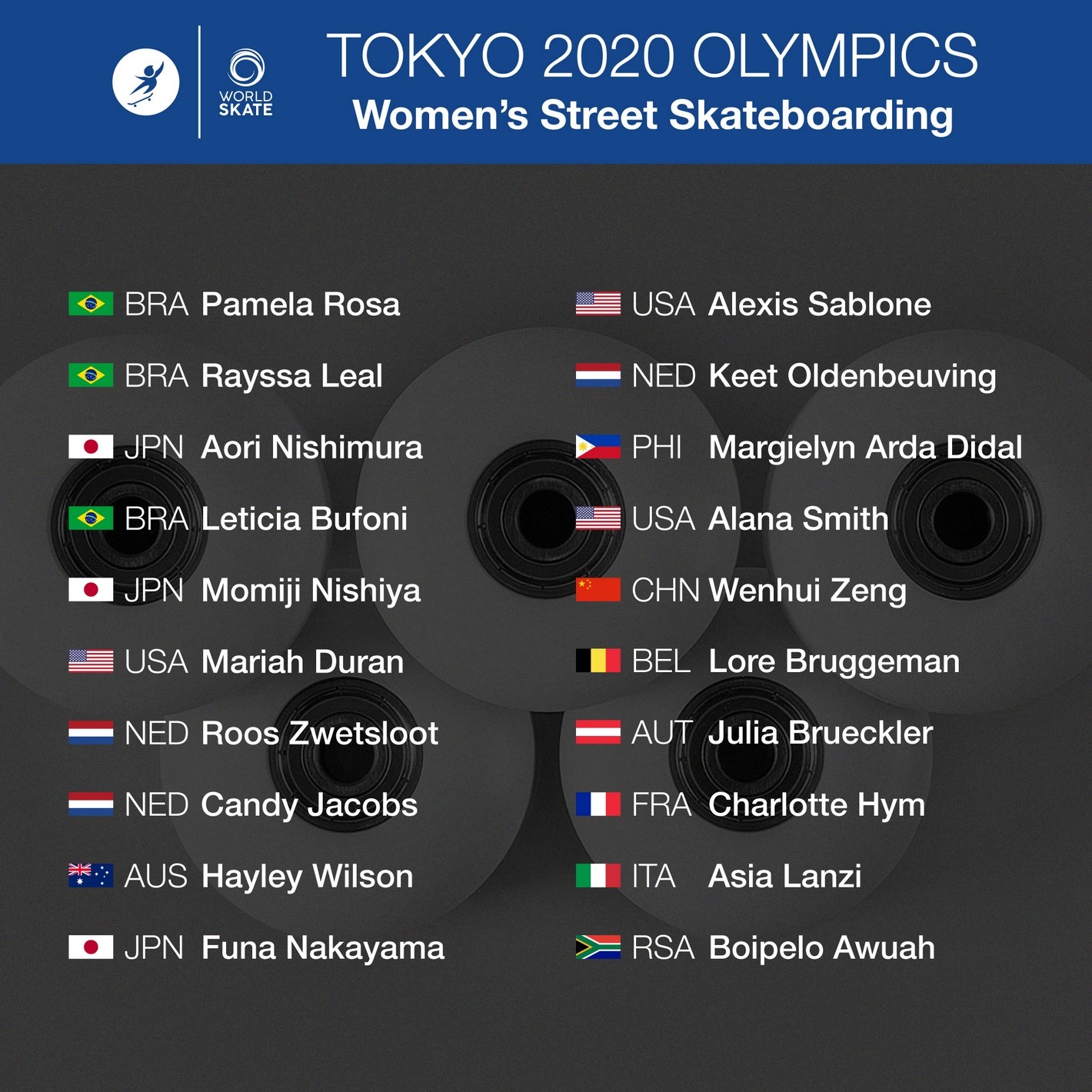 What Countries Are Invited?
Every country is invited, but skaters have to qualify into the games.
There will be 20 skaters in each category, with a max of 3 per country. They also newly added the rule that all continents must be represented.  This means at least one skater from Asia, Africa, North America, South America, Antarctica, Europe, and Australia must be represented (if a skater from that area skates in the qualifiers).

What Do Olympic Skateboarders Win?
The Olympics don't give out any money, there are just gold, silver, and bronze medals, but no cash purse.
Individual countries give cash to athletes when they win Olympic medals, so skaters could get bonus checks from their respective governments after winning, but the Olympic Games don't give out any monetary awards. Whoever wins the first-ever skateboarding Olympics will definitely get some crazy corporate endorsement deals coming their way, it will be interesting to see where corporate sponsorships go in the next few years.

Who is Building the Olympic Skatepark?
California skateparks have won the official bid for the Japan Olympics skatepark building contract. They are the company that builds most of the SLS skateparks, Dew Tour Parks, and Vans Park series bowls.

Here's a sneak peek at the course for the 2021 Olympics in Japan. 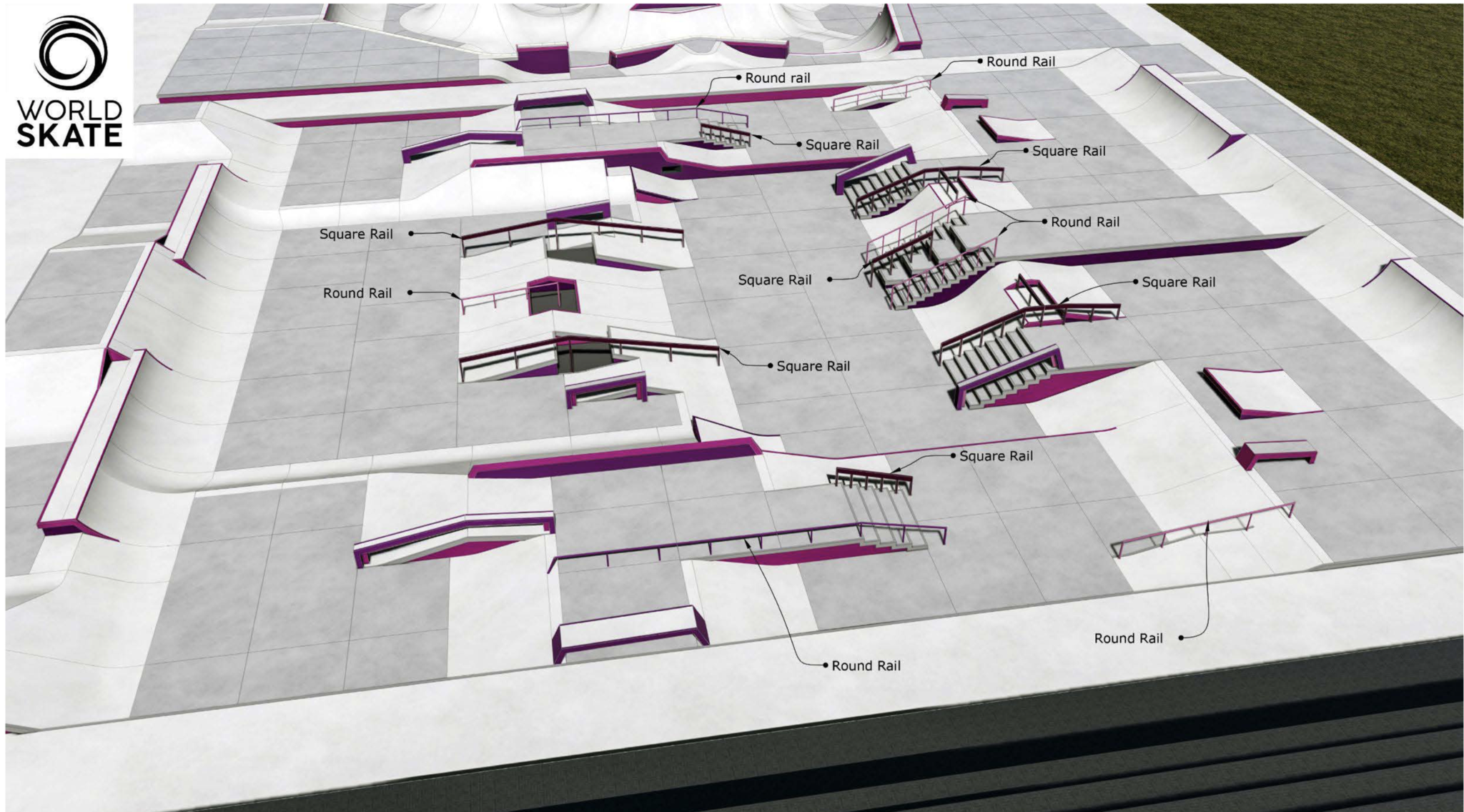 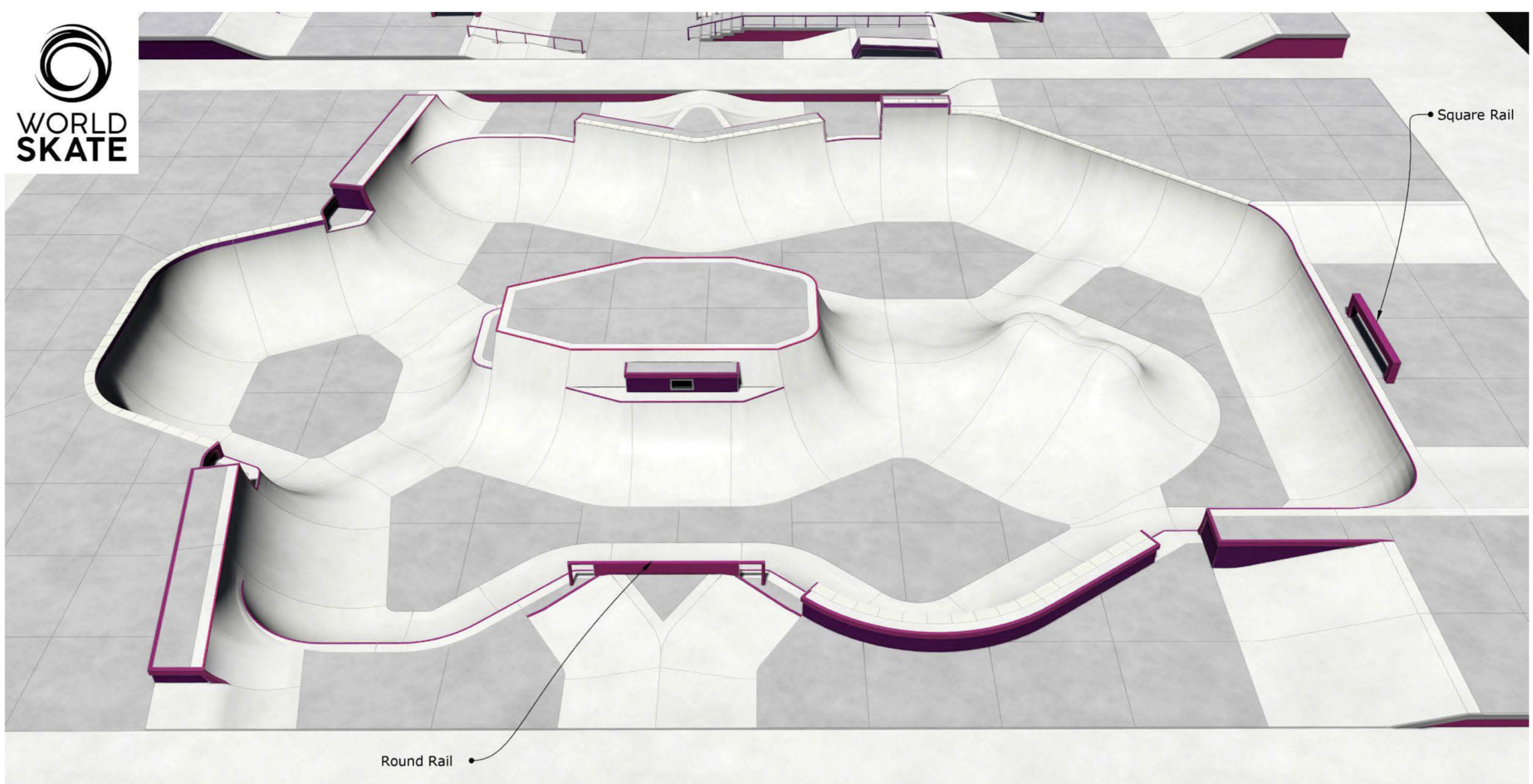 Will There Be Skateboarding Uniforms At The Olympics?
The short answer is yes, but the Olympic skateboarding uniforms will look more like regular clothing than the spandex bobsled uniforms. Each country will get to create its own Olympic skateboarding uniform. The uniforms are usually put out to a bidding process where companies can pay to design and have their logos on the Olympic uniform. (for more info see the bidding process below)

The Canadian Olympic skateboarding uniform is going to be done by a company called RYU (Rule Your Universe) it's a Canadian fitness apparel company (think like Lulumon athleticwear). USA skateboarding

No other logos and branding can be showing on the clothing which means that you won't see any obnoxious Red Bull hats and Monster energy logos.

In the village, athletes have to wear clothes supplied by their Canadian Olympic committee, so each country will have clothing provided by a country-sponsored clothing company for the opening ceremonies and while hanging out in the Olympic village.

Skateboarding Equipment:
Athlete equipment is always strictly scrutinized at all Olympic events. First off to stop people from using equipment that will allow people to cheat. Secondly, because the IOC wants to charge anyone possible for advertising their products and getting TV time.

Skaters are allowed to wear their own shoes and ride their own skateboards. Skateboards are allowed to be made out of whatever you want, no limitation on shape, materials, or size. But it states “The skateboard cannot be attached to a skater's feet by any physical means.“ No stickers are allowed on the boards, and any equipment that is used has to have been on the market for sale for at least 6 months prior to the Olympics.