Everything You Need To Know About Powell Peralta

1974 An aeronautic engineer with a degree from Stanford University starts making skateboard decks in his garage for his son his name is George Powell.

1976 George Powell gets laid off from his job in the aerospace industry and begins experimenting making skateboards for Sims. He’s breaking the skateboard construction mold by testing new materials like fiberglass and aluminum.

At this time Stacy Peralta is the number one ranked skateboarder in the world. Peralta and Tony Alva team up with a small shoe manufacturer in California called “Vans” to create a shoe designed specifically for skateboarding, they create the Vans Era.

1977 George Powell starts his own skateboard brand under the name Powell Corporation. He’s designing decks using maple and aluminum. He is also in the beginning stages of designing hard white polyurethane wheels called “the bones”, Bones Wheels would go on to become the number one wheels in skateboarding.

1978 Stacy Peralta & George Powell go into business together as Powell Peralta. This was an incredible partnership because George Powell was the ultimate product designer and Stacy Peralta had an amazing eye for marketing and talent scouting. Stacy was also a bit of a father figure and taught these skaters about making a career that had longevity. 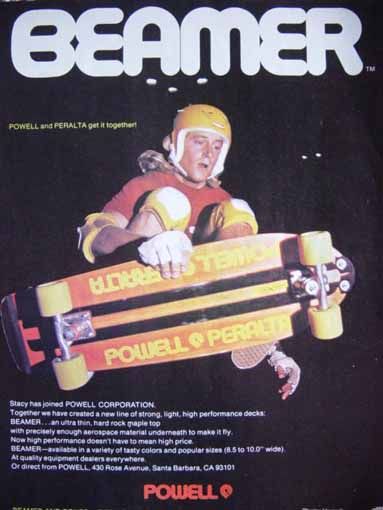 Ray Rodriguez is their first pro. Vernon Courtlandt Johnson (VCJ) is brought on to do the artwork for the first pro model, which becomes the now famous skull & sword graphic, and establishes the iconic look that Powell Peralta is famous for. 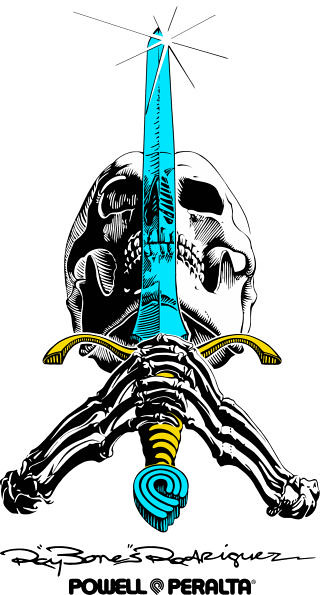 1979 Stacy Peralta wins Skater Of the Year award from Skateboarder Magazine, who is the biggest skateboard magazine in the world at the time. Peralta then retires from pro skateboarding to focus on the business of Powell Peralta. He decides to make a skate team similar to the Zephyr team he was a part of years earlier. He consults his friend Craig Stecyk to help him come up with a name, stating that he didn’t want the words skate or team in the name; Stecyk came up with the name The Bones Brigade. The original Bones Brigade crew consisted of Alan Gelfand, Steve Caballero, Mike McGill, and Ray Rodriguez. 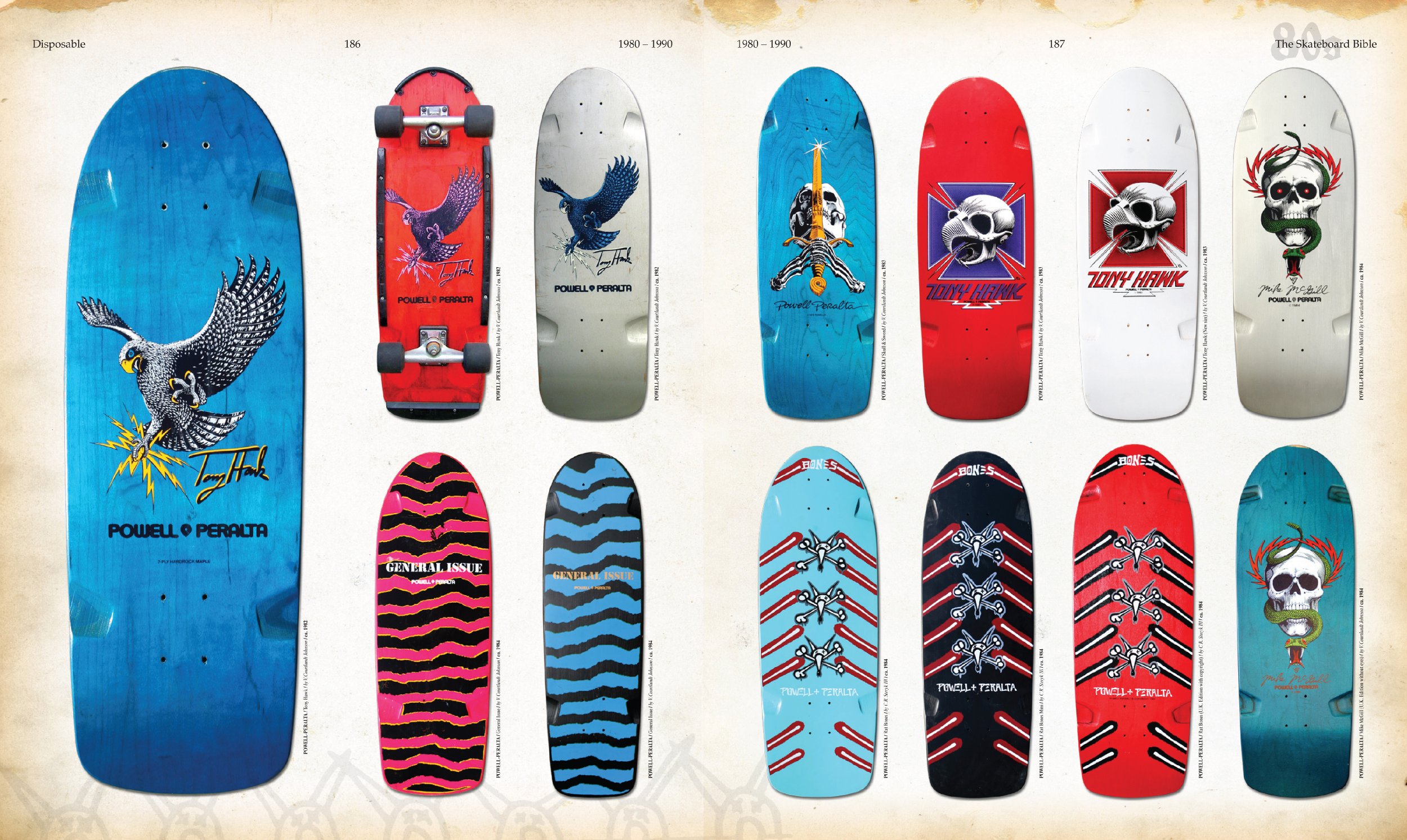 1984 Powell Peralta releases their first video named The Bones Brigade Video Show. Along with being the first ever Powell Peralta video, this is the first real skate video to come out where skaters go out and spend time to film a video part. Powell Peralta gives the video a budget of $15,000USD; they end up selling 30,000 copies and watching their sales rise.

This year is also important because Back To The Future comes out on the big screen, which helps popularize skateboarding to the mainstream and further increase Powell Peralta’s sales.

1987 Powell Peralta builds an insane ramp to film the video in the desert outside Oceanside California, with the focus of making another skateboard video. This video becomes The Search For Animal Chin, which is one of the most famous skateboard videos ever released. The video felt like a turning point for skateboarding because it was solely focused on vert skating with little to no freestyle in the entire video.

This year Powell Peralta also launches their ad campaign “Skateboarding Is Not A Crime”, which becomes one of the most famous skateboarding ads of all time. Also this year, the Hollywood movie Police Academy 4 is released and features most of the Bones Brigade in the movie.

Slowly people start leaving the big skateboard brands to start their own companies. Rodney Mullen and Mike Vallely both quit Powell Peralta to join forces with Steve Rocco and start World Industries. They invest $30,000 of their own money, which of course comes from Powell Peralta paychecks. This is a big deal because they are the first big names to ever leave the Powell Peralta brand.
In 1998, they would go on to sell World Industries for 20 Million dollars.

1989 Some members of the Bones Brigade make cameos in Gleaming The Cube, continuing their connection with Hollywood. Powell Peralta is more popular than ever, making over 30 Million dollars in 1989.

1990 The trend of skaters leaving the big companies to ride for smaller brands is exploding. The Big 3 (Santa Cruz, Vision & Powell Peralta) are starting to lose steam. Longtime Bones Brigade member Tommy Guerrero leaves Powell Peralta to start Real Skateboards with Jim Thiebaud, who also quits his spot on Powell Peralta.  Street skateboarding is blowing up continues to occupy more market share of skateboard sales, this is largely because it is much more accessible than vert skating.

This trend of popular skaters leaving to start their own brands causes some tension between George Powell and Stacy Peralta who don’t see eye to eye on how to handle this problem. George wants to focus on the strength and success of Powell Peralta, whereas Stacy wants to break the team up and give all the big name pros their own brands to encourage them to stay.

1991 The tension between George and Stacy continues, Stacy decides to stop working at Powell Peralta and pursue his film career. Over the years Stacy Peralta made lots of successful movies and commercials; including the Dogtown and Z-Boys documentary and the Lords Of Dogtownmovie. Later in his career, he also worked with the Tony Hawk Pro Skater video game series.

Powell Peralta releases an ad that is poking fun at the trend of smaller board brands. Notorious World Industries owner Steve Rocco takes the ad personally and retaliates with an ad entitled “Dear George”, where he writes a letter to George Powell and releases a series of Blind Skateboards making fun of Powell Peralta team riders and the VCJ artwork Powell Peralta was famous for.
Read More About The “Dear George” Ad Here 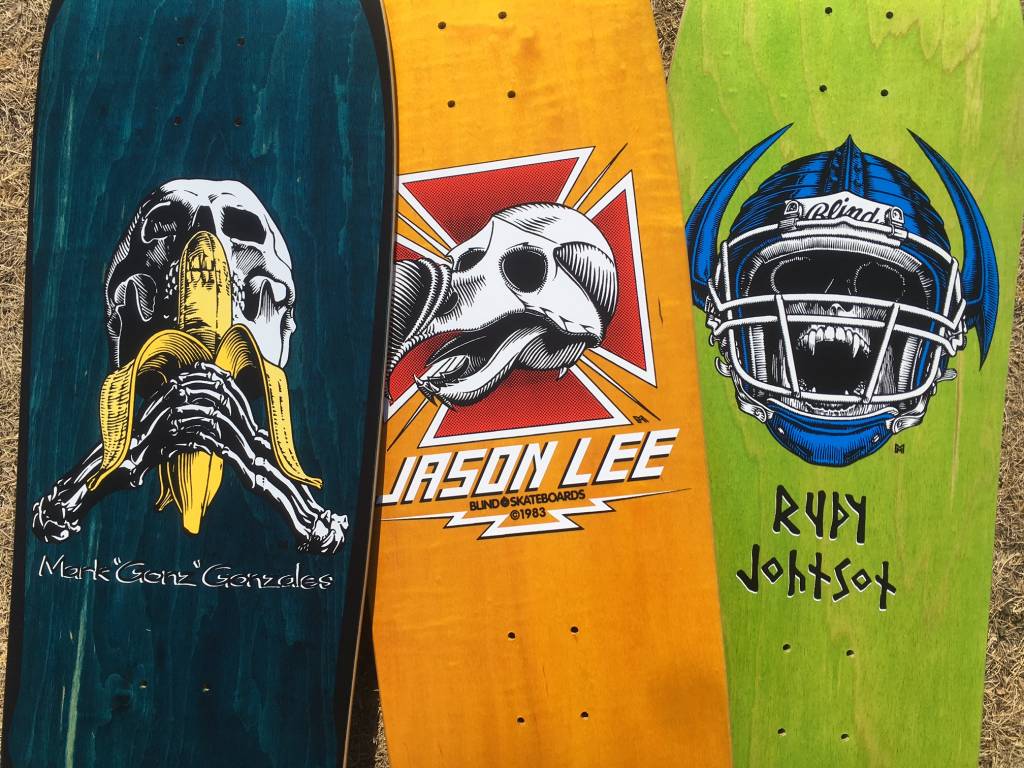 1992 In a crushing blow to Powell Peralta, Tony Hawk and Per Welinder leave the team and start Birdhouse Skateboards. Lance Mountain also decides to leave and start The Firm, Mike McGill retires from pro skateboarding to open a skateboard shop. Steve Caballero is now the only remaining original member or The Bones Brigade.

1993 George re-forms Powell Skateboards and continues designing skateboards under that umbrella. He also continues to own and operate Bones Wheels and Bones Bearings that are still viewed as the best in the industry.

George and Stacy spend over a decade apart, without talking or maintaining any kind of relationship with each other.

2006 After over a decade of silence and at the request of Lane Mountain, Stacy Peralta and George Powell start talking again. This is good timing as not long after Stacy Peralta starts working on his newest film Bones Brigade: An Autobiography.

2008 Over 20 years later, George Powell and Stacy Peralta push their names together and start working together again. They sign contracts with the original Bones Brigade members to do 11 different re-issue skateboard collections that will all be numbered and come with a certificate authenticity.

2010 Stacy Peralta is inducted into the Skateboarding Hall Of Fame. 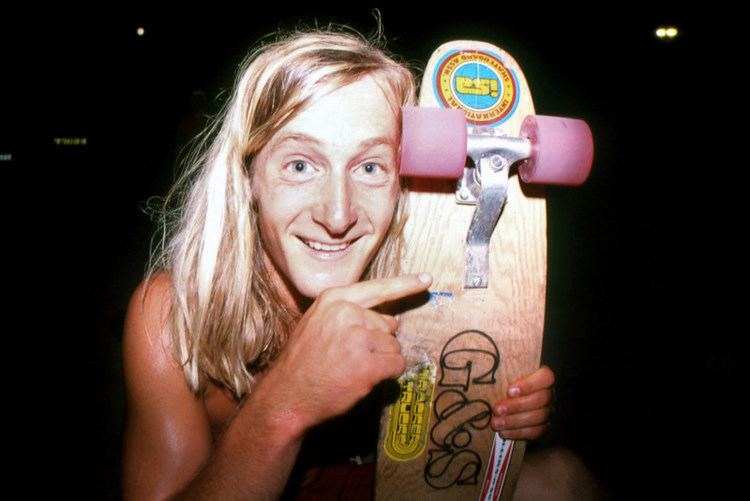 2011 VCJ rejoins Powell Peralta to once again do artwork for the company.

2012 The Bones Brigade documentary is released to the public and is a huge success. It brings a resurgence of people wanting retro skateboards and old Powell Peralta re-issue boards.

2016 Powell Peralta as a brand is inducted into the Skateboarding Hall Of Fame.

2019 Powell Peralta still releasing limited edition skateboards that are all hand made in Santa Barbara, California. They have recently announced that they will continue with their limited series and that a Powell Peralta Series 12 Re-Issue collection will be coming in the future.